Tulsa Football Will Finish Top Six in the AAC

Quick note: When I started writing this, my goal was for it to be a quick reaction post to Tulsa being picked to finish 9th in the 11-team AAC this year. However, when you haven't written anything for this blog since March and you're over-excited that football season is around the corner, it turns into a pseudo conference preview.

Also, this is the first full post since we've enabled comments on the blog! Check out our previous post for more info. You'll need to create a Disqus account to comment. Please destroy me with your correct opinions!


The American Athletic Conference released its 2020 Preseason Media Poll today. Here's what they've got for us this year: 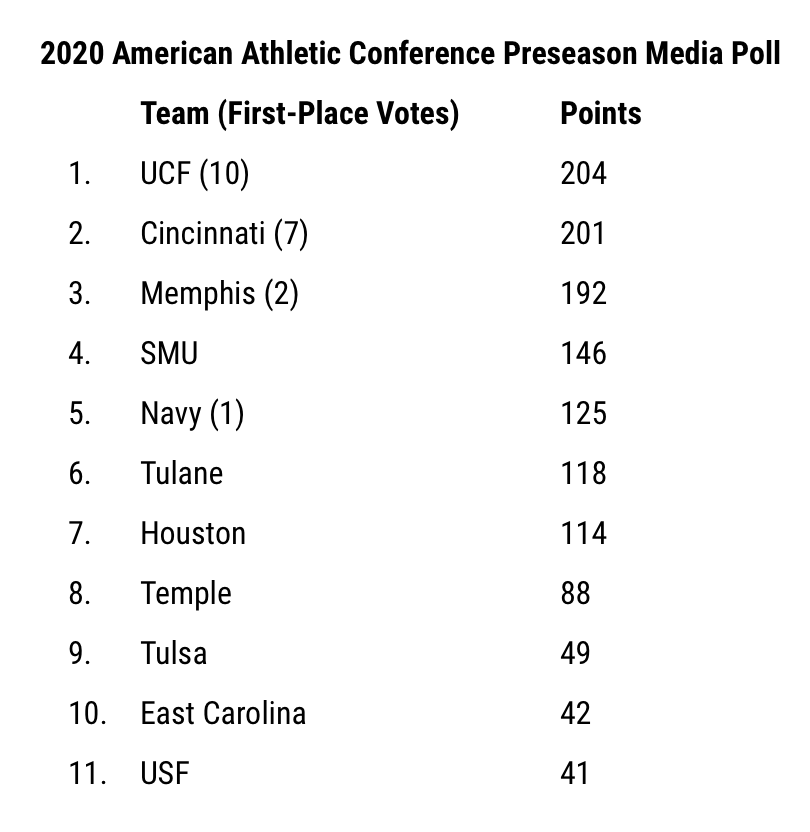 Remember that with the departure of UConn back in July, the American decided to stick with eleven teams, dump divisions, and go with a best-team-wins divisionless format.


The American has been around since 2013. Tulsa joined the ranks in 2014. Therefore, as of today, there have been seven AAC preseason polls announced that include Tulsa as a member. Here's where Tulsa's been slotted in each of those years:

And here's where Tulsa actually finished in those seasons:


Don't call him Frank Haith, but Philip Montgomery has surpassed preseason expectations every year aside from the 2017-18 season.

Will it happen again? Yes, it will.

Tulsa returns nine starters on offense, including 100% of its rushing, passing, and total offense yards and over 85% of its receiving yards and touchdowns.

The defense is a different story. We return only four starters, including only one on the defensive line and one linebacker; but seven returning players have started at least once for TU.


Tulsa will finish in the top 6 of the American for the first time since 2016.

Don't get me wrong – the American is loaded this year. This is the year Tulsa's been building towards for a while, though. At least offensively. And we've seen what Montgomery is capable of when there are a plethora of offensive weapons available to him. Here's where I think everyone falls when it's all said and done:

I would love to break all these teams down and give my reasoning, but that's not the point of this post.

The point of this post is to give some brief explanations as to why there are at least five teams that will finish below us in the conference.

So let me explain, from the bottom up:


Why We'll Beat You: USF


The American picked them to finish last for a reason. While my attitude toward USF has warmed significantly since they hired Jeff Scott, they aren't going to dig themselves out of the hole that Charlie Strong dug in one year.

After these last three years of TU football, I have officially soured on quarterback competitions. TU will have the same starter as the previous season for the first time since Dane Evans in 2016. USF, however, is in the midst of a battle between Jordan McCloud, Cade Fortin, and Noah Johnson. Maybe one of them will work out, but I don't have much confidence in their QB spot.

Arguably their two overall best players from last season, RB Jordan Cronkrite and TE Mitchell Wilcox, are gone. They'll struggle offensively due to basic lack of talent, and their defense will have to do more than their fair share once again.

There simply isn't enough talent on this team for Jeff Scott to bring it all back together in one year. I'm confident USF will be strong again after a couple of years under Scott, but this year won't be it.


Why We'll Beat You: East Carolina


I get it, Holton Ahlers is a bad dude. He will throw for a million yards like he did last year. C.J. Johnson, Tyler Snead, and Blake Proehl will all rack up tons of receiving yards like they did last year, too.

However, the running game was and still is a significant weakness. Demetrius Mauney, their lead back, had just 446 yards total on the season – averaging just 3.6 yards per carry.

Also, that defense was terrible. Ceding nearly 500 yards per game in total offense to opposing teams is unacceptable. The coaching staff has been considerably shaken up on the defensive side, but I don't think first-year coaches are going to be enough to fix the glaring issues right away. 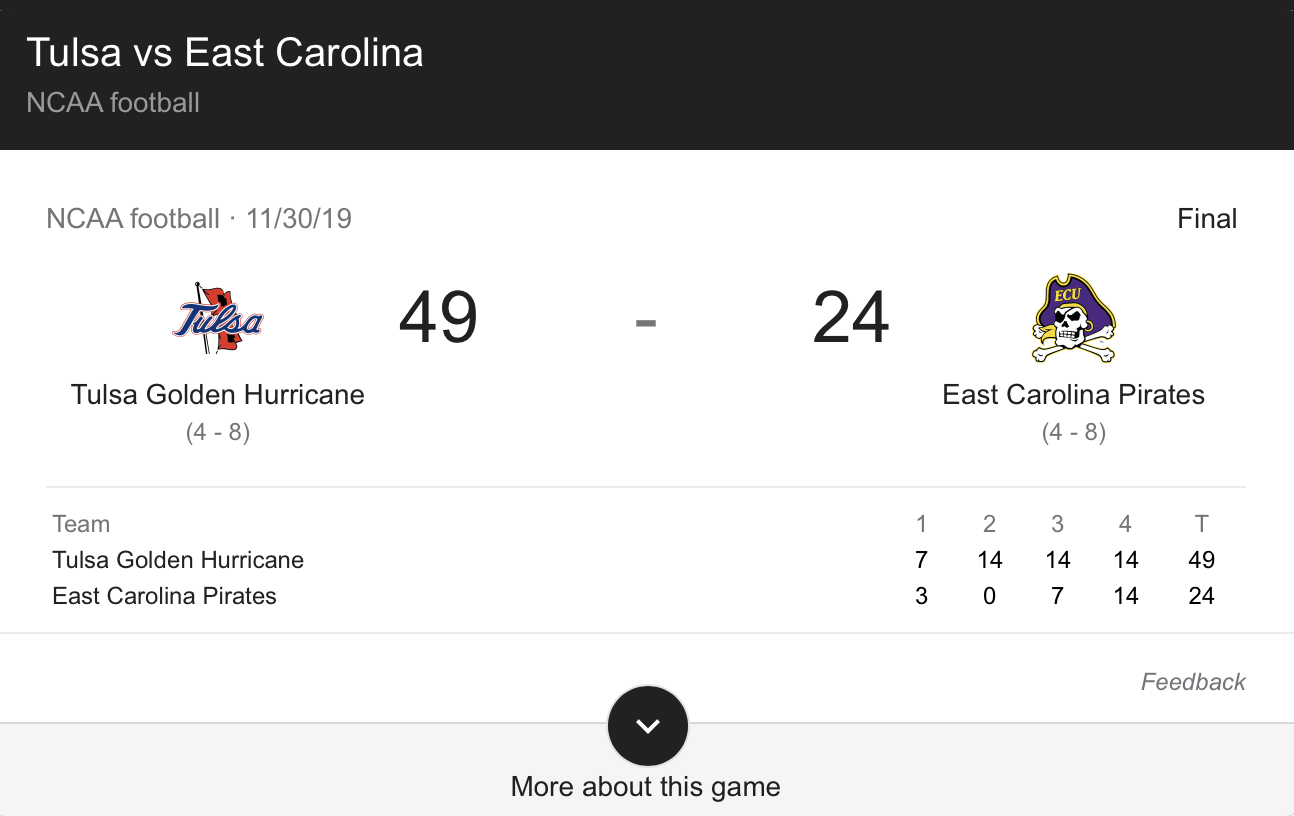 Why We'll Beat You: Temple


Temple, in my mind, is probably how most AAC fans feel about Tulsa: I just don't think about them very often. They've been a good program recently. The Matt Rhule days were incredible, the Geoff Collins days were weird, and the jury's still out on Rod Carey. Oh yeah and Manny Diaz was there for 17 days, but let's not talk about him.

But that has nothing to do with why we'll beat Temple.

The reasons start with Anthony Russo. I am simply not sold on him being a good quarterback. Maybe he breaks out this year as a senior with WRs Jadan Blue and Branden Mack out wide again, but I don't think so. He threw 21 TDs and 12 INTs last year, and that was an improvement over 2018-19's 14 TD/INT campaign, but his passing efficiency rating barely improved from year to year – from 125.1 in 2018 to 126.9 in 2019.

The other big story is the defense. Temple's defense has been its calling card for years, and this is the year that they take a step back. They lost 2019's Defensive Player of the Year in Quincy Roche to Miami, and only 38% of the entire unit is returning. That's a tough hand to be dealt and I think they falter this year.

I also tweeted today that if we finish below Temple in the AAC standings, I will do a standalone podcast episode/blog post about how much better Temple is than Tulsa. So hold me to that.


Why We'll Beat You: Tulane


I love modern Tulane football. I'm a huge Willie Fritz fan, they have the best uniform/mascot combination in football, and Hall Ball gets me psyched for college football in general.

However, after starting last year 5-1, they went 2-5 the rest of the year and finished at 7-6 with a team that was honestly kind of loaded.

Offensively, Justin McMillan was an inaccurate but electric quarterback, they had a dominant stable of running backs in Darius Bradwell, Corey Dauphine, and Amare Jones, and don't forget WR Darnell Mooney who is now playing alongside our own Trevis Gipson for the Bears.

Their defense was also solid overall with headliners in P.J. Hall, Patrick Johnson, and Thakarius "Bo Pete" Keyes – who was drafted by the Chiefs.

The problem here is that of those eight players I mentioned, only Amare Jones and Patrick Johnson are returning. Those are some absolute ballers though.

We'll see a new face at quarterback with Keon Howard expected to win the starting QB job after transferring from Southern Miss and backing up McMillan last year.

The receiver position is wide open. With Darnell Mooney and Jalen McCleskey gone, no returning receivers had more than one receiving touchdown last year. While Tulane rushes much more often than they pass, the receiving game is still very important for them. Someone will need to step up big time to fill the absence left by Mooney and McCleskey. My money's on OU transfer Mykel Jones, but he alone won't be enough.

At running back, they lose Darius Bradwell but retain Amare Jones. They would have retained senior back Corey Dauphine as well, but he tore his achilles tendon in early July and that unfortunately brings his college career to an end. Jones will be joined by Tyjae Spears and Cameron Carroll in what should still be a strong backfield.

Defensively, I think they'll be fine. They lose some big talents but return key members as well. I don't think there's a big drop-off on that side of the ball this year.

Overall, Tulane loses 56% of its production from last year's team that ended at 7-6. That's rough. Tulane will be a solid team this year once again, but Tulsa will have the offensive firepower to finish ahead of the Green Wave.


Why We'll Beat You: Houston

We'll soon see the results of last year's weird situation that resulted in several of Houston's key players redshirting, but one thing is certain: star QB D'Eriq King is gone. After sitting out after four games last year, he transferred to Miami along with the aforementioned Quincy Roche of Temple.

Even without King, this one is easily the toughest argument to make. The Cougars will be good this year. They return 83% of their players and 93% of their defense. There are stars returning all over this team. The running game is in great hands with Kyle Porter and Mulbah Car, Marquez Stevenson is arguably the best receiver in the conference, and they return basically their entire defense. And let's please remember that we lost to them last year when half of their starters were taking the year off.

The big question marks are the quarterback play and the defense.

QB Clayton Tune was completely uninspiring last year – going 106/179 with 11 touchdowns and 9 interceptions. He's going to be the Cougars' starting quarterback this year, and he'll need to improve considerably if Houston's going to meet their potential. I'm not convinced he will, though he did land in a very difficult situation last year.

Defensively, I'm not sure what to make of them. I love watching Grant Stuard fly around like a mad man, and Damarion Williams is back and is sure to have another standout year, but Houston finished 113th out of 130 in Team Defense last year. As I mentioned though, 93% of that defense returns this season, and you have to think that they'll improve on the defensive end because of that.

I think Tulsa will have a breakout year this year, and they'll edge Houston in the head-to-head matchup as well as in the overall AAC standings. I'll reiterate that this is the most difficult to see of the bunch, but hey, I'm swinging on this one.


Do you think Tulsa will finish better than 9th in the 11-team American Athletic Conference? Do you think they'll finish worse than that? Let us know in the comments! And again, for more information on the comments section, check out our previous post: Introducing Comments. Stay golden.