Golden Hurristats: Through the Bye Week

Tulsa has wrapped up their out of conference schedule and sit where most people probably expected them to record-wise, at 2–2. On top of that we’ve made it through the first bye week of this season, which makes it a great time to look at some more stats for this season.


Just like the previous Hurristats post, I want to start with the three key factors and dive into their importance to games we’ve played so far. First up let’s take a look at average yards per attempt. 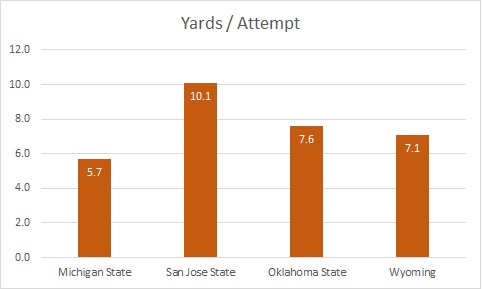 After struggling in the first game against Michigan State and their defense, Zach Smith bounced back with a great performance against San Jose State and two solid games against OSU and Wyoming. His season average sits at 7.5 yards per attempt. Two important comparisons with that stat: one, that puts Tulsa at 64th in the country, and two, it is 0.9 yards per attempt higher than Tulsa’s 2018 ensemble performance. That 0.9 is more impressive when you look at how much more reliant Tulsa is on the passing game this season. Take a look at this table:

This season Tulsa is averaging more plays per game, a larger percentage of which are passing plays, leading to more passing attempts per game. And still with such a large increase in volume, Zach Smith has a higher completion percentage which, in turn, is leading to that higher yards per attempt. These numbers show that Zach Smith has been a good quarterback for Tulsa so far this season.

Continuing on that point here is Smith’s Total Quarterback Rating through four games so far: 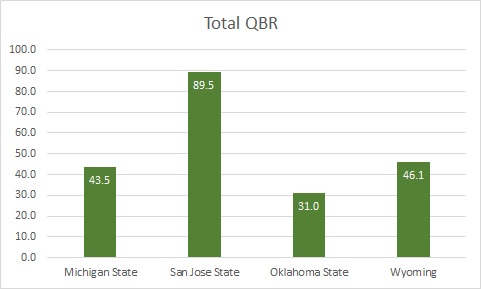 ESPN has this strange issue where Zach Smith is listed at 38th with a 71.7 QBR /and/ at 79th with a 51.5. Not sure why this is the case, but the 51.5 is the correct rating through four games. The single biggest negative factor in his rating is the expected points lost from sacks which sits at -11.0. Now that’s not all on Smith, but in tandem with the offensive line. To be fair, though the rate at which Tulsa’s quarterback is being sacked isn’t all that different from last season. In fact it’s gone down from 10.4 to 10.3! That being said it’s still 115th in the country and being better than last year isn’t the highest bar to cross. If the line can get the pass protection down, then we would expect Smith’s QBR to trend upward through the remainder of the season.

Finally let’s look at the average distance on third down.

After a rough start against Michigan State, this seems to be trending in the right direction. But the overall average of 7.7 yards is still too high. There are a couple of reasons in my mind why that number is closer to ten yards than it is to five.

First, is the lack of a strong rushing attack this season. This is not a knock on our running backs though. Shamari Brooks has been good this season, especially in creating yards out of broken and missed tackles. I don’t like to keep harping on this, but the run blocking has not been present so far this season, and Tulsa’s line yards this season currently ranks 127th in the country. For a team like Tulsa that historically likes to run the ball on first down, that’s already creating an uphill battle on second and long.

And second, albeit connected to my first point, Tulsa is only averaging 4.4 yards per play this season. That ranks in the bottom 15-percent of college football. Just from watching this team, it seems that the offense relies on the big plays to balance out the high frequency of plays that go for little to no gain. Right now that’s kind of working (TU is 2–2 after all), but big plays often rely too much on chance, and if we want more consistent success on offense, we need to improve our ability to move the ball outside of Smith’s bombs or Brooks’ highlight runs.

Why is third down distance so important? Let’s take a look with this week’s stat breakdown.

But, because I’m a big math nerd and like to do statistical breakdowns, I’m going to do that exactly. Particularly, I’m going to look at the success rate that Tulsa has had this season from four different ranges on third down: 1–2 yards, 3–5 yards, 6–10 yards, and 11-plus.

I chose to group it that way to because those distances are what separate the kind of play the offense is most likely to run (at least in my mind). 1–2 yards are running downs, 3–5 could be a run or a pass, 6–10 yards are standard passing downs, and anything greater than 10 is a long passing down. So having explained that, let’s take a look at our success in each particular category:

Unsurprisingly, our success rate between 1–10 yards is drastically better than our success rate for anything greater than 10 yards. Unfortunately, a whopping 21-percent of our third down plays have been 3rd and > 10. This is due to a combination of tackles-for-losses, sacks, and penalties. In an ideal world, when you start 1st and 10, you shouldn’t be in a situation where you need more than 10 yards on third down. That’s the wrong direction for goodness’ sake!

Overall our third down conversion rate is 42.9-percent. That’s 43rd in the country so far this season. If you get rid of the plays beyond 10 yards, that conversion rate jumps up to 50.9, which would be ranked 11th in the country in-between LSU and SMU! That’s why the average distance is so important to our season. We could be among the elite offenses in the country for converting on third down, if we just made third down more manageable, more consistently. When you factor in the number of third downs Tulsa faces—the fallout from the high number of plays Philip Montgomery likes to run in a game—upping the number of third downs we convert would unlock the scoring potential our offense.

Lastly, I want to highlight that 81.3-percent conversion rate from 2 yards or less. I want to give credit where credit is due, the offensive line and the tight ends are great at in these short-yardage situations. Our power success rate continues to be in the top-25 in the country. This is something that we do really well right now, and is just another reason why lowering the average third down yardage will help. We’ve already proven that we can be successful up close in those situations, so let’s take full advantage.

Be sure to stay tuned later this week for our first non-Hurristats post about conference rivalries! For next week’s post I plan to do a break down of the defense for the first time this season.