The Odd Case of Frank Haith

Notably, Frank Haith's contract is up at the end of next season. A decision on whether to extend him or fire him will be made this year.

According to the Tulsa World, AD Rick Dickson said he hopes to have both Frank Haith's and Philip Montgomery's contract situations resolved by July.

So it's decision time.

Following the first-round conference tournament loss to Tulane, Kelly Hines asked Frank Haith if he expects to be the head coach again next year. Haith replied with the following:

"I don’t anticipate not being the head coach. We won the conference championship last year and we had 10 new players and we have a pandemic. If I’m judged on this season, based on what we did last year, that would be very disappointing."

Fair enough, no one should be judged on the results of one season. So let's look at Haith's seven-year tenure at TU and see how he stacks up.


Haith just concluded his seventh season at TU. His overall record here is 127-88, good for a 59.3% win-loss percentage.

He's made one NCAA tournament, his average KenPom ranking is 104, and he's had two losing seasons.

"But you're Tulsa, you shouldn't expect to be consistently strong in the AAC". I hear you, non-Tulsa fan who is reading this, but you are wrong.

From 1994-2000, Tulsa made the NCAA tournament six out of seven years. Half were in the Missouri Valley Conference, half were in the Western Athletic Conference. Five of those six appearances were as at-large bids.

Tulsa has proven it can achieve that level of success. Frank Haith has not proven that he can be the man to get us back there.

Here's how Haith's KenPom results stack up against former Tulsa coaches going back to 1997, courtesy of @TulsaHop. I edited the image slightly to include the final ranking at each point in the chart. 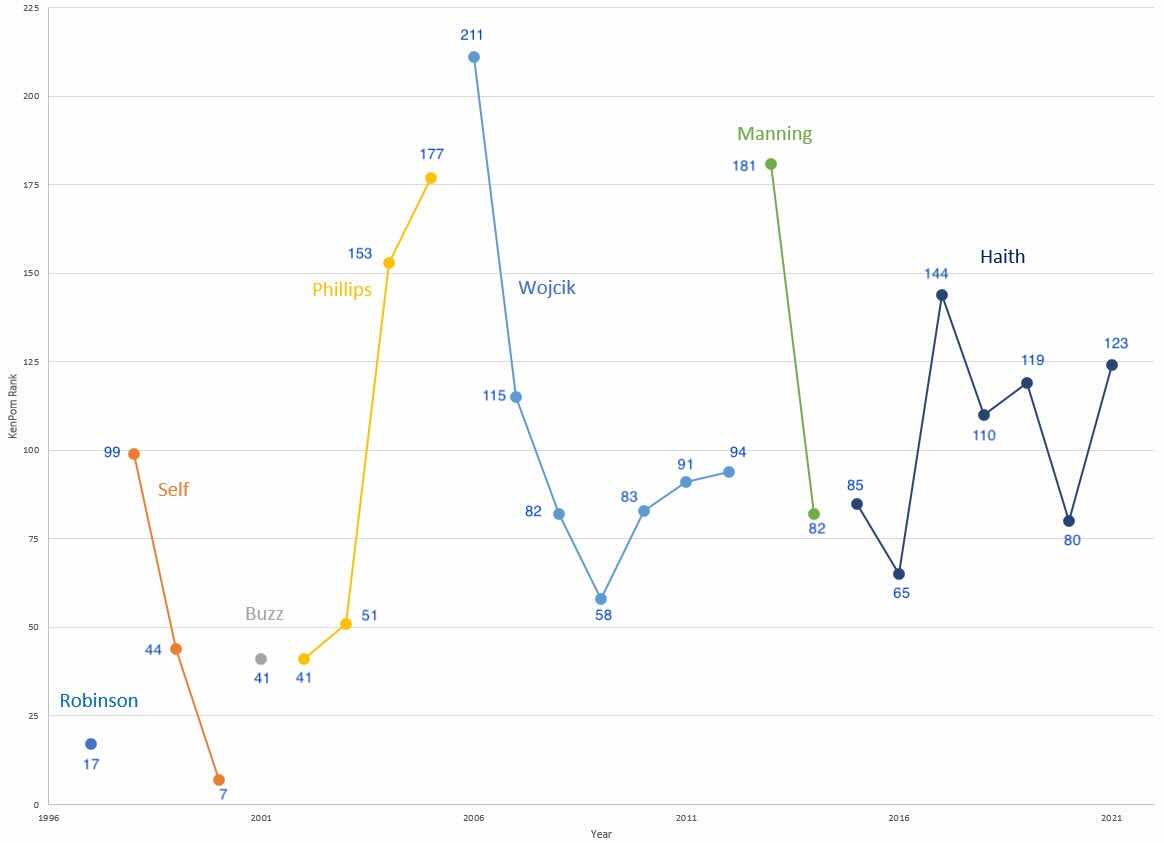 Chart from @TulsaHop - lower is better


The first thing you might notice from Haith's KenPom numbers is that there's no steady trend. It's a wild ride with no consistent line up or down. That's not the case for any of the other coaches in this chart.

Two of his three best years were with guys he didn't recruit: James Woodard, Shaq Harrison, D'Andre Wright, Pat Birt, Rashad Ray/Smith, etc. If we remove those years from his resume, his average KenPom ranking drops to 115 with two losing seasons.

Last season was clearly a high point for Haith. A regular season AAC co-championship, a first-team all-conference player in Martins Igbanu, and Haith himself named the AAC Coach of the Year after being picked to finish 10th in the league preseason.

It also would have resulted in postseason play, though likely the NIT seeing as no brackets had us in the NCAA tournament as an at-large bid. And we had just suffered a 22-point blowout loss at the hands of Wichita State. The postseason was canceled altogether due to COVID-19.

Looking at his Tulsa career as a whole, though, we've been consistently poor in 3-point percentage, free throw percentage, points per game, blocks, and offensive rebounding.


Going back to the chart above. If the cycle of better-then-worse-then-better holds, we should improve next year.

Unfortunately, it's difficult to see that happening. Who were our best players this season? The answer is unequivocally Brandon Rachal, Elijah Joiner, and Darien Jackson. They are all seniors. Although they could return next year due to the NCAA granting an extra year of eligibility due to COVID-19.

In a normal year, though, those guys would all be gone. We'd be left with a promising forward in Rey Idowu, an inconsistent-to-poor outside shooting game from Curtis Haywood, Keyshawn Embery-Simpson, and Austin Richie, and some young guys still proving themselves. It's hard to imagine an uptick next year.

Frank Haith has said in the past that his strategy when entering into a new conference is to evaluate what it takes to win in that league and build on it.

He's had seven years to figure out how to win in the American. A lot of his winning happened with other coaches' players. He's had some success, but at this point we've likely already seen peak Frank Haith. We could lose our three best players at the end of this season, and there is no clear story around how we'll replace that production.

If peak Frank Haith is an NIT bid, that's not going to cut it.


The back half of this Tulsa World article by Bill Haisten does a solid, concise comparison of Frank Haith and Doug Wojcik. This is a comparison I've seen more and more frequently over the last several weeks.

To summarize: they have nearly the same winning percentage (Wojcik's was actually higher), there is a lack of postseason appearances, and attendance at home games plummeted.

The paragraph that stuck out to me most was the following:

"During the 2019-20 season, TU’s home attendance average was the lowest in the 23-season history of the Reynolds Center. It was worse than in 2011-12, when Wojcik was fired in part because of poor attendance."

During Haith's best season with all his established players, the program was at an all-time low in terms of attendance. That is ... not good.

Bill concludes his post by confronting the problem of apathy within the program. While I was at TU from 2013-2017, I understood this on a fundamental level. It's tough to get TU students widely engaged in athletics. I spent far too much of my time as a student trying to get people to come to games with me – and that was during a relatively good stretch.

When Danny Manning was hired, there was a real sense of excitement for the basketball program. He was a promising, high profile hire and the team was fun to watch under him.

It was a blow when Manning left for Wake Forest, but most people were willing to give Frank Haith a fair shot. Early in Haith's tenure, excitement stayed relatively high because we were successful and made the postseason his first two years (NIT 2015, NCAA Tournament 2016).

There's been a steady decline in program excitement since 2016 though, with primarily disappointing seasons interrupted by a good blip last year. But even that good blip did nothing to help fan support.

Middling success marked by a lack of fan interest does not equal a successful head coach, in my opinion.


The Case For Frank Haith

The Case Against Frank Haith


So what does Rick Dickson do?

Does he fire the coach who just last season led TU to a share of the conference championship and won AAC Coach of the Year?

Does he retain the coach who has only one (fortunate) NCAA Tournament appearance and who has otherwise been a middling coach with one good blip in the last five years?

Does he fire a good man who willingly took a pay cut when Tulsa needed it and who has run a clean program?

Does he retain the coach who severely underperformed this year and who doesn't seem to have recruited the talent to properly replace our outgoing seniors?

We are at a tipping point.

If we extend Frank Haith again, I'm legitimately worried about a consistent decline in the program. Do we think Haith is going to be the one to return Tulsa to its former glory? Can he get us back to the NCAA Tournament in any kind of consistent manner?

I think fans have answered those questions with their attendance numbers, and Haith has not performed well enough to overcome that significant shortcoming.

People just don't care about Tulsa basketball right now. Maybe Haith can turn it around seven+ years in, but I'd be surprised.

Last season alone should not save his job.

The program needs a reboot. Frank Haith is a good man, but it's time to find a new head coach.


Discussing a head coaching change is polarizing. I've given some of my perspective here, but I'm just me. There are surely nuances - good and bad - that I've missed. I want to know what you think.

Leave your comments below, or get in touch with us on Twitter or through email.