The Hurricane Reigns in Orlando

QB Dillon Gabriel and the Knights did not live up to their fiery words. Despite Gabriel calling UCF the "best team in Florida", and acknowledging that they've "all been waiting for this one", Tulsa proved yet again that they are, in fact, UCF's kryptonite.

TU out-physicalled, out-manned, out-worked, and straight up out-played the Knights – especially in the second half. And don't tell Josh Heupel, but he got out-coached by Philip Montgomery. UCF committed eighteen penalties compared to Tulsa's eight.

After beating UCF in Tulsa last year, The Hurricane went and did it in Orlando. They absolutely earned this win. And man, do they deserve it.


It is truly a time for celebration.


As most Tulsa games are, it was very odd.

Early in the game, there was a stretch that looked like this:

It was weird, friends. The weather played a role, for sure, but Tulsa just looked lost out there for a while. I'll chalk it up to a combination of the weather, bad luck, a slow start, and being psyched out about playing the #11 team on the road.


The Defense Stepped Up


UCF, as they usually do, came out lightning fast. Big plays by the likes of Dillon Gabriel, Jacob Harris, Jaylon Robinson, and Otis Anderson are pretty much par for the course in Orlando, and you're not going to keep the Knights to zero points.

However, with the offense finding new and creative ways to disappoint and embarrass themselves in the first quarter, the defense was the only reason the game was within reach at all early on.

Zaven Collins was an animal once again. No one will be able to contain that man. He was everywhere. Ten tackles, three and a half for loss, two pass breakups, an interception, and a forced safety? Against #11 UCF? To beat the Knights, Tulsa was going to need another standout game from him, and he absolutely answered the bell.

I started this paragraph by listing the defensive players who had great games, but the list honestly was going to cover everyone. They played lights out. Twenty-three of the twenty-six points allowed were in the first half, and most of those points were caused by offensive missteps.

DT Anthony Goodlow logged a sack for the second straight game, DE Jaxon Player was all over the field, including this ABSOLUTE BEAUTY in which he HURDLED A GUY and ran fifty yards down the field trying to make a play. S TieNeal Martin had kind of a coming-out party with his four pass breakups and tackle for loss. LB Justin Wright made big plays all night including three tackles for loss. LB Treyvon Reeves had a very good game, but also had a VERY BUMMER dropped interception that would have sealed the deal even earlier. The list goes on and on, and we haven't even talked about Allie Green or Akayleb Evans yet. Both of those guys played extremely well, although both also got burned a time or two.


The four play, eighty-eight yard drive to end the second quarter completely changed the momentum and the rest of the game. After an initial incompletion, Smith completed three passes for nineteen, twenty-one, and forty-eight yards respectively. And that forty-eight yarder was the absolute beauty out to Josh Johnson for the touchdown.

Much to the chagrin of UCF fans, Josh Heupel and the Knights proceeded to pussyfoot around and run the clock out for the remainder of the first half. UCF would only score a field goal for the rest of the game.

On play 0 of the second half, Bryson Powers happened. Zack Long kicked off to UCF's Johnny Richardson to get things going, and Powers made the play of the game. While tackling Richardson, Powers straight up took the ball away from him. Mid-tackle, he got his arm in there, rolled over while pulling the ball away, and the play ended with a turnover and TU ball at the thirty-four yard line.

The very next play, Zach Smith threw a thirty-four yard LASER to Sam Crawford Jr. for a touchdown. I mean that ball was zipped across the field. Ten seconds into the second half, it was a four-point game.

This sequence completely changed the game. It was a different ball club out there from then on. We looked sharp, we looked powerful, while UCF looked lost and scared. It was an incredible turn of events, and things just got better from there.


The Offense Made Big Time Plays


Zach Smith got off to a VERY rough start. However, after only completing one pass for nine yards in the first quarter with an interception, and a mostly rough second quarter, Smith started to absolutely light UCF's defense up. He finished the game 17/29 for 273 yards, three touchdowns, and didn't throw another interception the rest of the game. His release was quick, he was playing with confidence, and he wanted to go win the game.

Keylon Stokes, after being nearly invisible in the first half, finally broke out and wound up with six catches for ninety-five yards and a touchdown. Sam Crawford and Josh Johnson also made huge impacts. Each of them scored with thirty-four and forty-eight yard TD receptions, respectively.

On the rushing side, it was mostly the T.K. Wilkerson show. And I'm not mad about it. The man proved himself to be a powerful runner once again and is as deserving of the lead-back title as anyone. He rushed twenty-two times for eighty-six yards and a touchdown. Additionally, Corey Taylor had eleven carries for sixty yards and Deneric Prince had eight carries for forty-one yards.


For reasons we (or at least I) still don't know, freshman scholarship kicker Tyler Tipton didn't make the trip to Orlando. So the kicking duties fell to senior walk-on Zack Long, and he handled the responsibilities (mostly) admirably. He did miss an extra point, which was particularly untimely as that would have tied the game at twenty-six all.

BUT he was two for two on field goals, the second of which was a nice thirty-four yarder that put Tulsa up by eight with a minute and a half to go. That kick all but guaranteed Tulsa would not lose in regulation. That's nerve-wracking for anyone, and he knocked it through. Also, Long had literally never played football before walking on to the team. Shout out to that dude.

But the place kicking wasn't even the big story of special teams. Lachlan Wilson is college football's new favorite punter.

First of all, just look at this man. 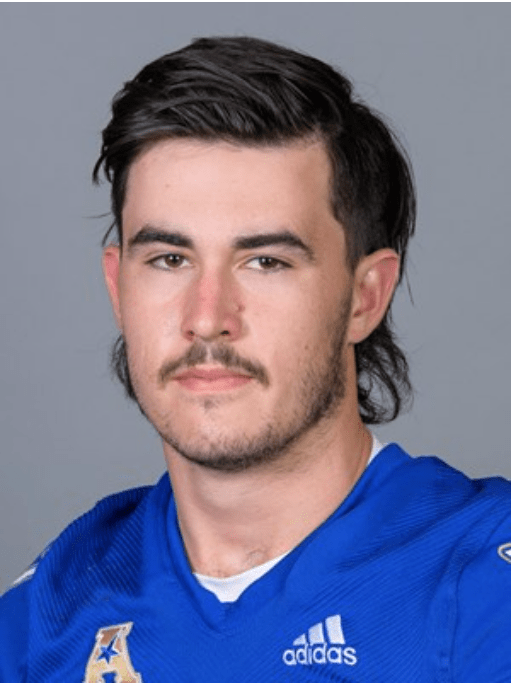 The mullet, the mustache, the fact that he's an Aussie, it's the perfect mix.

Appearance aside, he put together one hell of a punting game last night. Seven punts averaging forty-five yards per punt, with his long being a sixty-seven yarder with perfect backspin.

He got the attention of many, including former Tulsa kicker Danny Donley, who had this to say on Twitter:

I love it so much.

And, of course, we can't mention special teams this game without again bringing up Bryson Powers' ridiculous strip/fumble recovery to kick off the second half.


Tulsa went and did the thing. They went into Orlando against the undefeated and #11 UCF Knights, the 2017 national champions and powerhouse of The American, and came out with the best win of Philip Montgomery's tenure as Head Coach.

Honestly, I still can't believe it.

Sure, UCF killed themselves with penalties, but the Hurricane simply looked like the better team out there. We looked bigger, faster, and stronger. UCF looked nervous and exhausted the entire second half. They couldn't stop us, and our defense had no trouble stopping their much-lauded and highly explosive offense.

If we can march this Tulsa team onto the field every game for the rest of season, it's going to be a special year.